I went to Florida in March with my two youngest kids to visit my Mom who goes there for the winter.  She stays in a small town named Zephyrhills, which is about 50 mins from Tampa.  Although I flew down, she had her own car there and had no problem transporting the stuff back for me.   After every buy I would put the bags into a back storage closet, never really noticing just how much I was accumulating!
Found some pretty cool stuff!  I found the prices comparable to how much I would pay here.  With one exception, the mobile home park she stays in has an annual sale in April, but they open it every Friday afternoon so people can both drop stuff off and browse.  The browsing is a little tricky, they have stuff mostly boxed up and shelved.  Only stuff they are currently are going through is the stuff you are able to look through. The volunteers from the park they go through dropped off items didn't seem 100% happy for the drop in customers, since they were trying to go through donations and figure out where the other "like" things were stored to try and keep some level of organization on the whole space.  It is kind of a weird system.  I was careful to stay out of the way, and not to make messes with the boxes that I could access.  There was much talk among the volunteers of past browsers that made huge messes and how awful these people were.  Nothing was marked, no prices at all, they priced everything just prior to the annual sale.  So I looked for a woman who didn't seem as irritated as some of them and began asking her price questions.  She was a woman that clearly wanted to sell the stuff.  Reasonable prices and since I was asking about a number of things, she offered a total price at the end, instead of all individual prices.  I loved her.  This weekend I decided to start going through the Florida bags of goodness.  Basically I filled up this nice Redmon  a.k.a Red Man, picnic basket and had a filled small grocery bag for the grand total of $20.00.  My kind of sale. 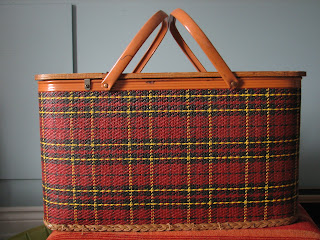 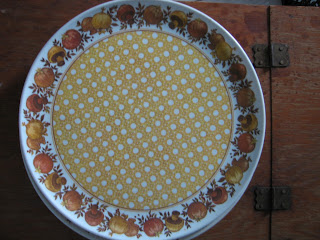 The plates are marked "Lexington, USA" and are plastic, I like the cool caning pattern on them, they were inside the picnic basket, so I imagine, used together.  I really like the picnic basket and I've only seen them sold at Antiques stores or markets, am considering hanging onto it.
Found these Pyrex mugs in the Flirtation pattern, the flowered ones, and Filigree pattern. 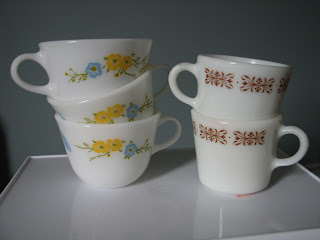 I thought this was a Pyex platter when I picked it up, but it is a Phoenix, Opalware made in UK.  Found a teacup and saucer on ebay in the same pattern, but pattern wasn't noted in listing. 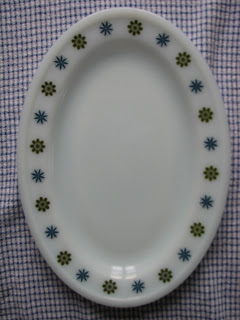 At a neighbouring town I found this Butterfly Gold Creamer and Sugar bowl.  Looks like the sugar bowl originally had a lid.  Too bad. 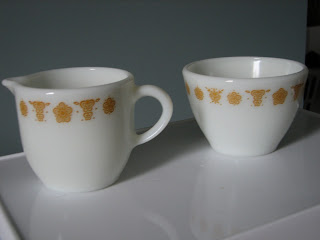 Someone must have collected Peanuts memorbilia, at the same store there was the motherload of it it.  Bobbleheads, mugs, pencils, my Brother, who died a couple of years ago, was Ia lifelong fan of Charles Schultz and his gang.   So I bought a couple of items, without knowing anything about it. Just thinking if I don't sell it I wouldn't mind having those few pieces around.  The tin band aid box has band aids still in it.  The block has images all around and is a bank with a rubber stopper on the base.  Picked up a couple of other Peanuts things too, a Charlie Brown figure, a Charlie Brown brush and an unopened pencil case with pencils, eraser and sharpener.  Cute stuff!  There is still more to go through, but at this is some of the things I got while there. 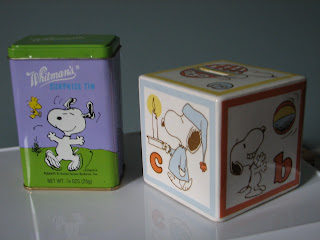 I've been to Florida annually for the past 3 years, but this was the first year my mom had a car down there that I was able to fill up ;).  I'm thinking of driving down there myself next year with the kids, we'll see how brave I am, venturing out on my own with the two littlest when it gets closer, but it sure was awesome to check out the thrifts while there!

﻿
Have linked up with  http://sirthriftalot.blogspot.ca/ Sir Thift a Lot
http://www.alivingspace.com/2013/04/the-nifty-thrifty-id-buy-you-moon.html A Living Space
Posted by kateken at 09:18 1 comment:

This past year I've had a booth at an Antiques Mall in a nearby town.  I choose the place because it is touristy and thought it would be a good choice with the kinds of things I sell.  It has not been a profitable year.  The rent was high, they take a commission and my best customers have been other dealers that get a discount.  So I gave my notice a month ago.  It was a bit disappointing.  I was really hoping that it would be a success.  However limited it may be.  But financially it was not.  In the next couple of weeks I plan on putting money down to secure another much less expensive space, in another little town.  I really like the buying and selling, I really like hunting and finding cool old stuff.  Then researching it, finding out all about it, or sometimes not finding any info on it! I wanted to start this blog in order to connect with other like minded buyers and sellers.
So, that's my introduction of sorts!

I found this wooden doll, stamped "made in USSR", I haven't seen one quite like it before.  It opens up and I'm not sure if she originally was a stacking doll, or what she was used for.  Really love her face and painted designs. 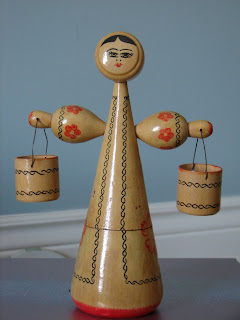 Have linked up with: Sir Thift A Lot! http://sirthriftalot.blogspot.ca/
A Living Space http://www.alivingspace.com/2013/04/the-nifty-thrifty-oregon-and-moon.html
Me and My Shadow http://missielizzie-meandmyshadow.blogspot.ca/
Posted by kateken at 09:19 No comments: